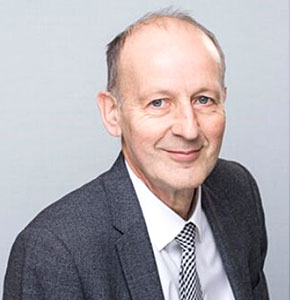 Steve was Director of Strategic Partnerships and Chief Operating Officer of the Global Institute for Food Security from July, 2019-June 2022. Prior to this, he had served as Interim Executive Director and CEO at the Institute, from December 2018, following his role as a non-executive member of the GIFS Board.

Previously he was Deputy CEO at the UK Biotechnology and Biological Sciences Research Council (BBSRC) from 2008 to October 2018 where his recent focus was on leading BBSRC international strategy and global research partnerships. He has extensive experience of research policy, funding and administration in research councils, institutes and universities having joined BBSRC on its formation in 1994 from the Agricultural and Food Research Council, initially serving as Director of Finance. He has subsequently undertaken a variety of roles, including BBSRC Interim Chief Executive for one year and Chief Operating Officer for seven years, a role that included international relations alongside other strategic initiatives such as UK Campus Developments.

Steve has developed extensive links in food security and agricultural research with funders in the US, Canada, Brazil, France, India, China, Mexico, European Union and the Consultative Group for International Agricultural Research (CGIAR). He was involved in establishing the UK Grand Challenges Research Fund, took a leading role in establishing the G20 International Wheat Initiative and the International Wheat Yield Partnership, a public-private partnership. In recent years, he has led the UK delegation to G20 meetings of agricultural chief scientists in Russia, Australia, Turkey, China, Germany and Argentina. Steve’s external roles included Chair of the Funders Committee of the G20 sponsored Global Wheat Initiative, Vice Chair of the International Wheat Yield partnership, director of the Norwich Research Park Campus Partnership, trustee of the Medical Research Foundation and Life Arc Medical charities and observer member on the boards of two leading agri–food institutes: Rothamsted Research and the Institute of Biological, Environmental and Rural Sciences.

Steve is fellow of the Royal Society of Biology and fellow of the Chartered Institute of Management Accountants. For his support for scientific research, Steve was honoured in 2013 with the title Commander of the Order of the British Empire, awarded for outstanding work in the respective individual’s field.